skip to main | skip to sidebar

As you may know, this past Friday I presented a short lecture at Nerd Nite entitled "Godzilla: History, Biology and Behavior of Hyper-evolved Theropod Kaiju." The event took place at Galapagos Art Space in Brooklyn, a beautiful new performance lounge in the heart of DUMBO. 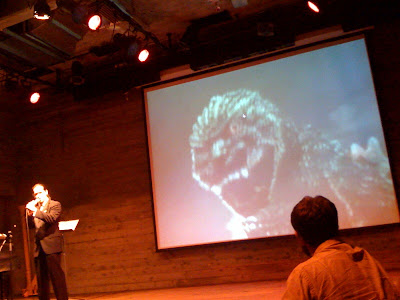 I had begun my work on the presentation nearly a month beforehand (more even), but was quickly delayed by a crashed logic board on my computer, which took the Apple store 12 days to replace. So I ended up having two weeks to put together my lecture, which might seem like a lot, but I also had to reconstruct both the backing beats and video from my "Up From the Depths" Godzilla video, as all my original work had been stolen with my old Macbook Pro. So I was a bit crunched for time.

Fortunately for me, many wonderful bloggers, scientists and fans, have posted a lot of material regarding the speculative zoology of Godzilla. Using all of that available material, with a few ideas of my own, I slowly began figuring out a structure for my lecture. Headed into my final week, I had, more or less, a rough draft of about 80% of the presentation text, and started to build the Powerpoint slideshow from that. Ah Powerpoint, I've never found you useful before. Ever.

I find deadlines both overwhelming and empowering, so as Friday approached, I grew simultaneously anxious and excited. By Thursday, I could see the end in sight, which is a good sign, but I could also see how much work I had over the remaining 24-hours. Still, with a few hours to spare, everything came together and I was even able to rehearse my presentation in front of my TV as it ran my slides and felt semi-confident as I headed out to Brooklyn.

8pm, and all is fine. Gay Nerd Speed Dating is in full, if perhaps sparsely attended, swing, and the Nerd Nite host is on stage presiding over the festivities. That wraps up and shortly thereafter I find myself on stage doing tech and sound check for my impending talk/rap. There was a little scare for about 15 minutes when the video projector simply stopped working, but other than that the only hiccup was that in the end, due to various compatibility issues and missing cables, the other two lecturers ended up having to use my computer for their presentations. Macbook: 3, Thinkpad: 0.

The first two presentations go well - we learned a nice bit about both the evolution of Korean Pop Music and the Harp. Then, after a brief break and setup, it was my turn.

What followed was the most satisfying live performance of my entire career.

And what followed that was the realization that I had failed to hit record on my camera. 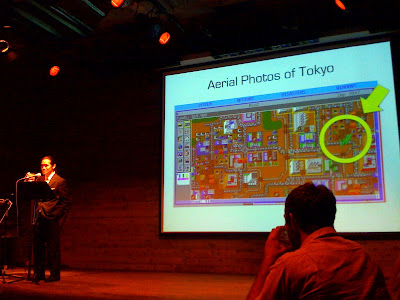 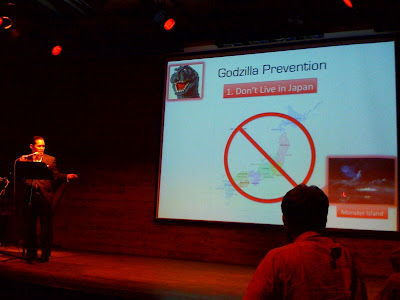 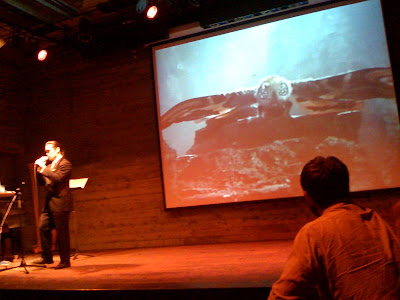 So I'm only left with my memories. Our host Matt provided me with an easy opening joke when he accidentally referred to the Japanese as "Japan people," and it from there I immediately relaxed. The audience was fantastic, responding to both my lecture and the accompanying slides incredibly well. The lecture may have run nearly twice as long as intended due to laugh breaks. I haven't performed live in quite some time, so the connection with the audience was intoxicating, and a hundred times so as it was my own material AND they were responding to it all.

Then I performed "Up From the Depths" live and it went pretty perfectly. End. Applause. Yay.

Following that, I had a great time during the Question and Answer section, fielding questions about Zombies vs Godzilla (Godzilla, of course), the origins of the Godzilla movie franchise and Global Warming vs Godzilla. I told the long-haired hippy who asked the climate change question that we should be more concerned about Godzilla, who is a real and present danger, than some imaginery threat of the ice caps melting in the future. I'd forgotten how much I love improvising on the spot, and this particular format was ideal for tickling this bit of my fancy.

Anyway, I'm sort of cringing sitting here tooting my own horn, even in the relatively anonymous world of internet blogging. So suffice it to say I had a great time and I think the audience did as well. A few positive blog posts about the evening:

(Yes, that's right. I Googled myself. Shut up.)

People were incredibly nice afterwards, coming up to me and giving very positive feedback. One kind fellow handed me the card to his online store and told me to pick out anything I liked and he'd send it to me. Another fellow had come down all the way from Vermont expressly for the Godzilla lecture and, I was glad to hear, wasn't disappointed.

One of the nicest compliments of the night was when a writer from The Colbert Report told me that the lecture was on the same level as that show (at which I tittered like a little school girl on the inside).

When I asked him if they were hiring, he responded, "We're never hiring."

Email ThisBlogThis!Share to TwitterShare to FacebookShare to Pinterest
Labels: Godzilla, Nerd Nite, Up from the Depths

Long enough ago to know that Powerpoint is a ridiculous program that only exists so that people working in advertising have something to do with their free time.

Shyaporn
I'm an actor, writer and director living in New York City. This is just a blog of random thoughts and experiences in my life. For some of my work, check out my YouTube videos. My Homepage My YouTube Channel